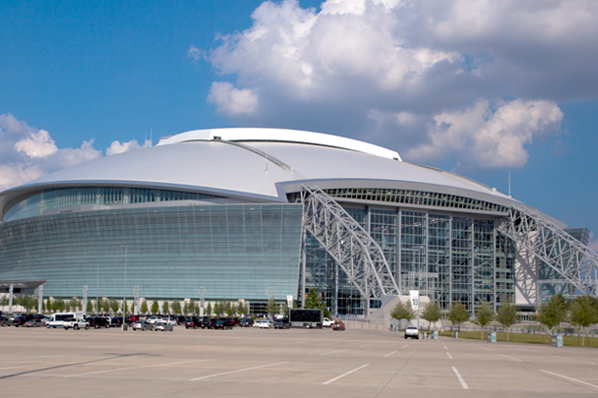 The Four ‘Must See’ Sports Stadiums in the US

Europe has its Cathedrals… the US has its Stadiums.

If you're a sports fan, at some point in your life you're going to need to get out to the old ballpark or football stadium or tennis court or ... well, you get the idea.

Long before HDTV the best way to experience sports was to go to a game.

Early stadiums were less about comfort and more about packing in the fans. Peanuts, popcorn and hot dogs were the only menu items. However, these were the houses of legend.

Today, our stadium designs start with opulent boxes for the big spenders and trickle down to the bleacher seats for the hoi polloi.

Whether you're a fan of the teams who call these places home, you can still admire their beauty.

So, what are the 4 best US ‘Cathedrals?’ This is the house that Ruth built.

If you have to ask, "Ruth who?" you're probably not much of a baseball fan.

Technically, it's the new old house that Ruth built. The original Yankee stadium was built in 1923 and like so many other original stadiums it was slammed with the wrecking ball only to be reborn across the street in 2009.

The new Yankee Stadium borrowed heavily from the old joint in terms of design elements except there are 7,000 less seats - but at least every one of those seats has a cup holder.

Word of warning: if you go to Yankee stadium and proudly wear the jersey of a team other than the Yankee's you might not come out unscathed. All part of the charm. This was the first retro ballpark that ushered in the modern era of ballparks that dip into their past to please their present fans.

Note the use of the word "ballpark" to describe Camden Yards. That's a clue to its vibe. Yes, it has luxury suites and modern amenities but it still feels like an old-fashioned diamond temple.

Maybe it's all the bricks or the wrap around seating. Let's just chalk it up to another example of charm from Charm City. Go O's. Built in 1922, the Rose Bowl is the place that is not so much about a hometown team as it is about a New Year's Day tradition.

No matter what happened the night before, you're probably going to tune into the New Year's Day classic and watch close to 100,000 fans cheer on their team of whatever team happens to be playing that year.

Watching the Rose Bowl in this granddaddy of football stadiums is a promised hangover cure. Welcome to the oldest Major League Baseball stadium still in use.

This has been home to the Boston Red Sox since 1912. That would put the place at just over a hundred years old.

To know Fenway is to know the Green Monster. This is the huge left field wall that is often the target of strong right-handed hitters.

For real history, try to snag the Lone Red Seat in Section 42, Row 37. This would be the spot where a home run by Ted Williams in 1946 landed and represents the longest home run at Fenway at 502 feet. Pretty cool.

Do you have fond memories of your first trip to a stadium? Was it a football game in the dead of winter? A baseball classic with the old man? How many stadiums have you been to? Let us know!